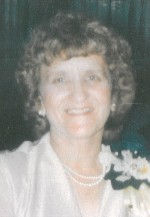 Elsie was born in a log cabin. She had been a member of First Baptist Church, Belleville, IL, since 1952, and attended services every Sunday. Elsie was a member of the Missionary Circle of First Baptist Church, member of the Talkers Club, and ushered at the church. Elsie enjoyed making flower arrangements and crafting. She was an animal lover, but she was especially fond of dogs and cats.  Elsie was so proud of grandchildren and was the happiest when they were around.

She was preceded in death by her beloved husband, Arthur W. Kreitner, whom she married on September 5, 1953, at the First Baptist Church, Belleville, IL, and who passed away on March 27, 2002; a beloved son, Kenneth Kreitner, who passed away August 11, 1981, at the age of 21; her parents, Richard and Minnie, nee Powers, Gregory; three brothers, Wilburn Gregory, at the age of 22 months, Elmer Keel, who was killed in Germany in 1945, while serving in the United States Army, and Richard Gregory; and a beloved pet, Sam.

Memorials may be made to St. Jude Children’s Research Hospital or the Shriners Hospitals for Children. Condolences may be expressed to the family online at www.rennerfh.com.

Mrs. Kreitner will join her husband and son in her final resting place at Walnut Hill Cemetery, Belleville, IL.