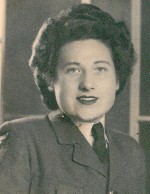 Cis served in the Royal Air Force (W.A.A.F.) as a Motor Transport Driver during WWII for four and a half years.  It was during that time that she met her future husband, Bill who was a MSgt in the U.S. Air Force. Shortly after their meeting he was transferred to North Africa and their relationship grew through written communication.  It was two and a half years before he was able to return to England in July, 1945 for three days when he was able to visit her family and to confirm their plans to marry.  After clearing all the bureaucratic hurdles, Cis came to the United States and was married at St. Mary’s Catholic Church, Belleville, on August 6, 1946.  Cis and Bill were one of the founding families of St. Augustine of Canterbury Catholic Church in Belleville.  She was one of the original members of the International Club which offered the opportunity for women from all over the world to successfully transition to life in the post war U.S.A.  She was actively involved in initiating the programs at Mamie Stookey School in the absence of publicly funded special education services needed by her son, Paul.  She was a loving wife, mother, grandmother, great-grandmother, and dear friend.  She spent her life caring for family, friends and neighbors throughout the years, maintaining her independence through most of her life.  She loved gathering family and friends together usually including a “cuppa” tea, and was sought out for her baking skills, being affectionately known as “The Queen of Tarts”.

Memorials may be made to Hospice of Southern Illinois or the charity of donor’s choice. Condolences may be expressed to the family online at www.rennerfh.com.

At Cis’s request there will be no visitation or formal services.  A private family prayer service with Msgr. William McGhee officiating will be held a later date.