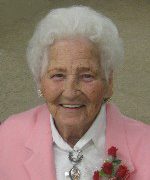 She was preceded in death by her husband, Adam Embrich, whom she married on August 23, 1941, in East St. Louis, IL, and died on February 28, 1989; her parents, John and Zuzanna, nee Seliga, Chagala; and her sisters and brothers.

Memorials may be made to donor’s choice. Condolences may be expressed to the family online at www.rennerfh.com.

Burial will be at Green Mount Catholic Cemetery.