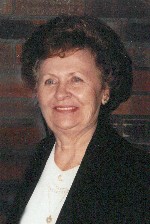 Mrs. Fiebig worked for Southwestern Bell Telephone Company before her marriage and taking on her favorite role as a wife and mother.  Emily volunteered at the Belleville Public Library’s genealogy department for 25 years.  She was a member of Zion Lutheran Church, Belleville, IL.

Emily was preceded in death by her husband of 57 years, Harold W. Fiebig, whom she married on August 15, 1953, and who died on December 27, 2010; one grandson, Nick Hampton; her parents, Frank C. and Mary, nee Vasut, Kobzina; one sister, Agnes Kujawski; and one brother, Adolph Kobzina.

Memorials may be made to Zion Lutheran Church, or to the Belleville Public Library.  Condolences may be expressed to the family online at www.rennerfh.com.

We want to send our heartfelt sympathies to all of dear Emily’s family. We worked with Emily and Harold for many years at the Belleville Public Library and know what dedication they put into their many volunteer hours there. Due to health reasons at this time, we will be unable to attend her visitation but again want to express our deepest condolences. Her extensive work at the Library will always remain a memorial to the special person that she was and she will always be remembered as a friend to us as well.