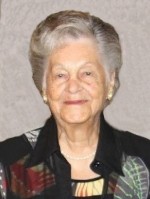 Mrs. Tribout, along with her husband Edwin, were the founders of Tribout Distributing in Belleville, established in 1946.  She was a member of St. Mary Catholic Church, Belleville, IL.

Erna was preceded in death by her husband of 37 years, Edwin W. Tribout, whom she married on August 31, 1940, at St. Peter’s Cathedral, Belleville, IL, and who died on February 8, 1978; her parents, William and Tillie, nee Schnur, Griebel; three brothers, Roy, Lester, and Walter Griebel; and three sisters, Irene Fink, Hilda Springer, and Edna Gain.

Special thanks are extended to the staff of The Atrium and Memorial Rehab Center, both in Belleville, for their kindness.

Memorials may be made to the Belleville Area Humane Society or in the form of masses. Condolences may be expressed to the family online at www.rennerfh.com.

Funeral:  A Mass of Christian Burial will be held at 10 a.m. Monday, May 14, 2018, at St. Mary’s Catholic Church, Belleville, IL, with Fr. Christopher Anyanwu and Msgr. James Blazine concelebrating.