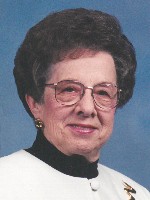 Mrs. Schroeder was a seamstress with Charles Meyer Pants Factory, Belleville, IL, for 28 years before her retirement.  She was a member of St. Henry’s Catholic Church, Belleville, IL.

Ethel was preceded in death by her husband of 60 years, Cletus P. Schroeder, whom she married on June 21, 1947, and who died on September 19, 2007; her parents, Henry and Theolinda, nee Ettling, Straubinger; and a brother, Norman Straubinger.

Surviving are two sisters, Marian Wilson
and Janice Schroeder, both of Belleville, IL;
and numerous nieces and nephews.

Memorials may be made in the form of Masses or to St. Paul’s Home, Belleville, IL.  Condolences may be expressed online at www.rennerfh.com.