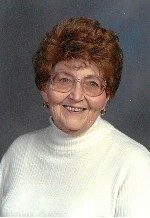 Mrs. Westfall began her working career as a Civil Service employee at Scott Air Force Base.  After marrying, she became a stay-at-home mom, allowing her to become the Girl Scout leader, the PTA president, and the room mother for her children.  After her children were grown, she managed a State Farm insurance office for her husband, and later worked at the Raetz State Farm Insurance Agency in Belleville, IL.

An avid card player, Ethel belonged to five bridge clubs, and one pinochle club.  She enjoyed camping with her family and friends, sewing, stitching, oil and acrylic painting, and china painting.  Ethel was a member of St. Paul United Church of Christ, Belleville, IL.

She was preceded in death by one daughter, Karla M. Griffith; her parents, Gregory and Lillian, nee Bauer, Herzog; and two sisters, Alice Bach and Louise Bauder.

Memorials may be made to the Shriners Hospital for Children, to St. Jude Children’s Research Hospital, or to the Belleville Area Humane Society.  Condolences may be expressed to the family online at www.rennerfh.com.

Visitation:  Friends may visit with the family from 4 to 7 p.m. Tuesday, July 19, 2016 at George Renner and Sons Funeral Home, Belleville, IL.

When I hear her name, I am reminded of a time of camping in Vandalia, IL. I brought my children, Shannon and Shawn Graham to spend the weekend with their grandparents, Chuck and Anita. Shannon went into Ethel’s area and came out wearing Ethel’s hair piece. The quiet situation was immediately replaced with Ethel’s giggles. She was such a grand lady. So sorry for the loss of Ethel.