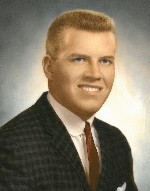 Print Obituary
Eugene “Spike” Sterling Briggs of Smithton, IL, passed away on May 11, 2022. He was born on June 29, 1938, in East St. Louis, IL to Florence and Harry Briggs and had a sister, Mary Lorentzen, all since passed.

He graduated from Assumption High School in 1956 and served in the US Army on active duty from 1959-63. After his active service he returned to East St. Louis and worked for National Supermarkets as a meat cutter. He was a member of UFCW Local 534 and former board vice-president until his retirement in 1998.

During the years of 1975-1980 he owned and operated Spike’s Meat Market on McClintock Avenue in Belleville, IL.

Eugene re-enlisted in the US Army Reserves in 1980 and retired in 1998 with the rank of Sergeant Major.

After retirement from National Supermarkets, he worked for the St. Clair County Health Department as a health inspector until retirement in 2012.

A devout catholic, he was an active member of numerous parishes throughout St. Clair County and regularly attended and assisted at daily mass.

In lieu of flowers, please submit donations to St. Michael’s Church or Hospice of Southern Illinois. Condolences may be expressed to the family online at www.rennerfh.com.