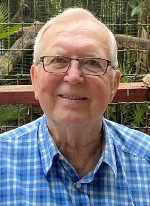 Gene lived a purposeful life, in constant and faithful activity in service to God and others, especially children and elderly. As a young adult, Gene worked as a Catholic missionary for the Jesuit Papal Volunteers as a teacher. He also began Sacred Heart School, which today has grown to Sacred Heart College in San Ignacio, Belize.

During his years in Belize, he forged lifelong relationships that bonded his U.S. and Belizean families who will continue the legacy of service that he founded. Uncle Gene honored both of his citizenships in the country of Belize and the U.S. by working tirelessly to improve lives in both of his countries.

Returning home, he began his efforts to help the children he encountered in Belize who suffered with severe orthopedic disabilities.  Gene’s tenacity brought together his family volunteers, local business professionals, health care providers at Shriners Hospital, St. Louis, and members of Rotary District 6510. And as the saying goes, “The rest is history.” Since its founding over 47 years ago, The Belize Children’s Project has helped over 400 children in the past, and continues its mission to provide care to the children of Belize.

Gene worked as a social worker and later as an educator of senior citizens at Southwestern Illinois College (SWIC).  A skillful grant writer, Gene played a pivotal role in securing federal funds to establish Programs and Services for Older Persons in Belleville, IL.

Gene was a longtime SWIC Board member, the former head of the St. Clair County Office on Aging, and chairman of the St. Clair County Housing Authority since 1989. He was the proud recipient of many awards, notably as the 2018 Hall of Fame inductee for Community Services of the Illinois Department of Aging. He served as diplomatic Consulate of Belize for the Greater St. Louis area.

He was preceded in death by his parents, Joseph and Nellie, nee Roland, Verdu; his brothers, Frank Verdu and Joseph Verdu; and his sisters, Elena Cory, Anna Anderson, and Lola Luther.

Gene is survived by his sister, Honsey (Richard) Schneider; and his sister-in law, Rose Marie (Frank) Verdu. He is also survived by 25 nieces and nephews and their families and a host of friends, many of whom continue his work in helping the world’s most vulnerable people.

To honor Uncle Gene and continue his legacy, his family requests in lieu of flowers, donations to the foundation established in 2018 in his name, Uncle Gene Foundation. Condolences may be expressed to the family online at www.rennerfh.com.

Funeral: A Mass of Christian Burial will be held at 12 noon Central Standard Time, Saturday, March 19, 2022, at the Shrine of Our Lady of the Snows Church, Belleville, IL, with Fr. Jim Fee, OMI, and Fr. Gene Neff concelebrating. The service will be live streamed at youtube.com/oblatesusa.

A private cremation interment will take place at a later date.

“In everything I have shown you that, by working hard we must help the weak. In this way we remember the Lord Jesus’ words: ‘It is more blessed to give than to receive.” ACTS 20:35.