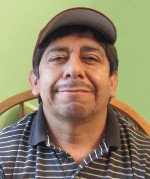 Mr. Huitron worked as a molding manufacturer for Allied Healthcare for 23 years.

He will be remembered for his giant heart made of gold.  He was always putting others before himself.  He loved cooking and spending time with his family and friends.  He constantly had a smile plastered on his face.  Felix was a loving husband, father, brother, uncle, and friend.  He will be greatly missed by all who were blessed to have known such a wonderful human being.

He was preceded in death by his mother, Teresa, nee Moctezuma, Huitron; and his sister, Martha, nee Huitron, Herrera.

Memorials may be made to Family Hospice.  Condolences may be expressed online at www.rennerfh.com.

My daddy, my hero, my best friend that is what he will always known to me. He was a great man and hardworker. He did everything he could for our family. I will miss you deeply. I love you pa.