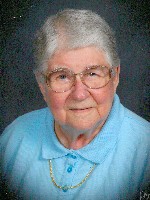 Florence was preceded in death by her husband of 61 years, Louis F. “Sonny” Kish, whom she married on June 6, 1946, and who died on January 26, 2008; her parents, Nicholas D. and Clara, nee Becker, Kempf; a son, William Kish; a grandson, Scott Phillips; a sister, Rose Ahring; two brothers-in-law, George Ahring and Cletus Frerking; and a son-in-law, Richard Phillips.