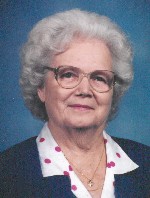 Mrs. Krupp retired as a bank officer from Belleville National Bank.  She was an active member of St. Henry’s Catholic Church, Belleville, IL, where she volunteered as a Eucharistic minister and helped with fish fries.  Florence also served as a tutor and mentor at Jefferson Grade School in Belleville, IL.

She was preceded in death by her husband of 58 years, Cletus P. Krupp, whom she married on August 16, 1945, and who died on October 2, 2003; her parents, Fred and Clara, nee Buesking, Schuerbaum; a sister, Lillian Sonnenberg; and four brothers, Fred, William, George, and Walter Schuerbaum.

Surviving are her two daughters, Kathleen Krupp of Belleville, IL,
and Janet (Tony) Houston of Swansea, IL;
and nieces and nephews.

We enjoyed her company. Many fond memories.

Kathleen & Janet:
I enjoyed working with your mother at Belleville National Savings Bank in the proof department.
Her photo brought back memories, she was always a well groomed individual. May she rest in peace.