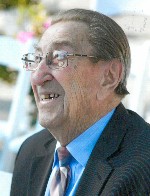 Mr. Hammel retired from Oliver C. Joseph after 43 years as an automobile mechanic, parts manager, and service manager.  He was a member of the International Association of Machinists, Local 313.  He was a lifetime member of Belleville Elks Lodge BPOE 481.  Floyd was a World War II U.S. Army veteran.  He was an avid golfer and enjoyed boating at the Lake of the Ozarks.

He was preceded in death by his wife of 67 years, Grace, nee Terragrossa, Hammel, whom he married on July 4, 1941, and who died on January 22, 2009; a son, James E. Hammel; his parents, Edward and Mary, nee Nowotny, Hammel; three brothers, Clifford Hammel, Harvey Siegler, and LeRoy Siegler; and two sisters, Hilda Athmer and Leona Stafford.

Memorial may be made to Hospice of Southern Illinois or to the Signal Hill Education Foundation.  Condolences may be expressed online at www.rennerfh.com.

Funeral:  Funeral services will be held at 9:30 a.m. Monday, August 3, 2015, at the funeral home with Msgr. William McGhee officiating.  Burial with military honors will follow at Valhalla Gardens of Memory, Belleville, IL.

Barb, Deepest sympathy to your family over the loss of your dad. The Wayne Scher Family