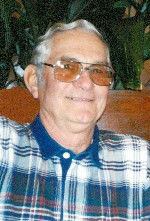 Mr. Hill worked for Ameren, formerly Union Electric, for 25 years before his retirement. He was a U. S. Air Force veteran.

A private family funeral service will be held.