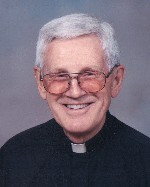 He made his first vows as an Oblate of Mary Immaculate on August 15, 1950, and was ordained on April 6, 1957.  He is celebrating his 65th year of priesthood. He spent 10 years as a parish priest in the Scandinavian Delegation and was a Professor of Theology at various locations including Washington DC, San Antonio, TX, and St. Paul, MN, for almost 20 years. Fr. Donald was instrumental in forming the Ecumenical Movement in Sweden. He was also a paritus, or chosen advisor, to one of the counsel fathers during the Second Vatican Council. He was fluent in several languages including Swedish, French, Italian, and Spanish.

He spent the latter part of his ministry as a parish priest at St. Francis de Sales (Chelan, WA) St. Francis Church (Tuscaloosa, AL), St. Aloysius Church (Bessemer, AL) St. Peter’s Parish (Volo, IL) and Handmaids of the Precious Blood (Lake Villa, IL) before he moved to St. Henry’s Oblate residence and finally to the Benedictine Living Community in Belleville, IL where he resided at the time of his death.

Fr. Dietz was preceded in death by his parents, Leo and Irene Dietz; a brother, Jack; and a sister, Jeanne Cunningham.

Surviving are a sister, JoAnn Spears; friends and Missionary Oblates of Mary Immaculate; and many nephews and nieces.

In lieu of flowers, memorials may be made to the Missionary Oblates of Mary Immaculate USA, 9480 North De Mazenod Drive, Belleville, IL 62223. Condolences may be expressed online at www.rennerfh.com.

Burial will be at St. Henry’s Oblate Cemetery in Belleville, IL, following a luncheon.