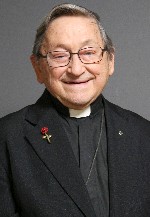 Fr. Elmar was born in Kempenich, West Germany on July 13, 1934, to the late Peter and Katarina Mauer.

His Oblate education began at St. Henry’s Prep School, Belleville, IL. He attended the Novitiate in Godfrey, IL, and the Our Lady of the Snows Scholasticate in Pass Christian, MS. He professed first vows as a Missionary Oblate of Mary Immaculate in 1959 and was ordained as a priest in 1964.

His ministry included missions in the Philippines and Denmark. He also served as pastor in Duluth and St. Paul, MN. Fr. Elmar Mauer was the Pilgrimage director at the National Shrine of Our Lady of the Snows in Belleville, IL for 10 years. Other assignments included Oblate Preaching team, Youth Mission Band in Belleville, Pastor of Immaculate Conception Parish in Centerville, St. Philips Parish in East St. Louis, chaplain at St. Elizabeth Hospital, and St. Henry’s Oblate Residence in Belleville before retiring at Dammert Geriatric Center. Fr. Elmar Mauer also served in the Teens Encounter Christ Movement and for several years celebrated Sunday mass with the parishioners of St. Pancratius Catholic Church, Fayetteville, IL.  He was the St. Louis Cardinals number one baseball fan and could always be seen wearing his red socks.

Fr. Mauer was preceded in death by his parents, Peter and Katarina Mauer.

He is survived by his brother, Rudi Mauer; and the Missionary Oblates of Mary Immaculate.

In lieu of flowers, memorials may be made to the Missionary Oblates of Mary Immaculate. 9480 North DeMazenod Drive, Belleville, IL, 62223. Condolences may be expressed online at www.rennerfh.com.

Funeral: A memorial mass will be held at 9:30 a.m. Tuesday, May 24, 2022, at the Church at National Shrine of Our Lady of the Snows, 442 South DeMazenod Drive, Belleville, IL, 62223. The Mass will be livestreamed on the oblatesusa.org YouTube channel. The link below will take you to the YouTube channel where you could follow the Mass. Oblatesusa – YouTube

According to his wishes, Fr. Elmar Mauer, OMI donated his body to Saint Louis University School of Medicine.