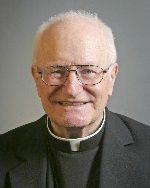 Print Obituary
Father Eugene V. Prendiville, OMI, 87, died on December 8, 2019, at the Dammert Care Center of The Esquiline Retirement Community at the National Shrine of Our Lady of the Snows, Belleville, Illinois.

He was born in 1932 in Chicago to the late John J. and Eileen, nee MacSweeney, Prendiville. He entered the Missionary Oblates of Mary Immaculate as a novice in 1952 and pronounced his first vows a year later in Godfrey, Illinois. He completed his major seminary studies in Pass Christian, MS, and was ordained a priest in 1958.

His first assignment as a priest was to the Oblate mission in Japan where he served from 1959 until 1965. Upon returning to the United States, he worked as a parish priest in Minnesota, Missouri, Wisconsin and Illinois. He also served for many years as chaplain in various health care institutions of the State of Illinois: State Hospital, Jacksonville; Lincoln State School, Lincoln; and Lincoln Development Center, Lincoln. His last assignments were as sacramental minister at St. Mary and St. Mark Parishes, Madison, IL, and as priest-in-residence at St. Elizabeth’s, Marine, IL. In 2011, he moved to St. Henry’s Oblate Residence, Belleville; and in 2018, he transferred to the Esquiline Retirement Community.

His greatest passion as a priest was to speak up for the Pro-Life cause, seeing each human life as a unique gift of God.

Father Gene was preceded in death by his parents and by his two brothers, John C. and James.

He is survived by his sister, Eileen Schmitz of Santa Fe, New Mexico; sister-in-law, Mary Prendiville of Wheaton, IL; 9 nieces and nephews; 16 great-nieces and nephews; and one great-grandniece. Mourning his passing are also some 3700 Missionary Oblates of Mary Immaculate serving in 60 countries.

As a sign of his respect for all human life, he has donated his body to Saint Louis University School of Medicine for the benefit of future medical science.

Memorial donations for the missions of the Oblates of Mary Immaculate would be greatly appreciated. Condolences may be expressed to the family online at www.rennerfh.com.