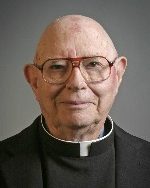 Print Obituary
Rev. James J. Wynne III, OMI, 92, died on August 19, 2018, at the Dammert Care Center of The Esquiline (Apartment Community) at the National Shrine of Our Lady of the Snows, Belleville, Illinois.

Fr. Wynne was born in 1926 to the late James J. and Gertrude (Murray) Wynne, Jr., in Providence, Rhode Island. He proudly served in the United States Air Force. While stationed at Scott AFB in Illinois, he decided that he wanted to become a flying missionary in the Arctic. He contacted the Missionary Oblates of Mary Immaculate who are known for their work among the Inuit and First Nation Peoples in Northern Canada and began his training for the priesthood at St. Henry’s Seminary in Belleville, IL. In 1948, he entered the Oblate Novitiate in Godfrey, IL, where, a year later, he pronounced his first vows as an Oblate. He completed his studies for the priesthood at De Mazenod Scholasticate in San Antonio, TX, and at Our Lady of the Snows Scholasticate in Pass Christian, MS, where he was ordained a priest in 1955.

His desire to serve as a missionary in a far-off land was realized when he was assigned as a young priest to the Philippines where he served from 1956-61. From 1961-1980, he traveled throughout the United States to at least 500 parishes to raise funds for the Philippine Missions. After a sabbatical, he became pastor at St. Columban’s Parish in Little Fork, MN (1982-88) and in Hay River, NWT, Canada (1988-98). He served as chaplain at the Apartment Community, Belleville, IL (1998-2000) and helped in various parishes in the Archdiocese of Anchorage, AK (2001-02). Upon his retirement from full-time ministry, he moved in 2002 to St. Henry’s Oblate Residence in Belleville, and in 2013, he moved to the Apartment Community (now called The Esquiline) at the Shrine of Our Lady of the Snows, Belleville.

He was preceded in death by his parents and his brother, Raymond. Survivors include his brothers Clinton (Rosemary) of Hernando, FL; and Kenneth (Ann) of Midlothian, VA.

In lieu of flowers, donations for the Missionary Oblates of Mary Immaculate (9480 North DeMazenod Drive, Belleville, IL 62223) would be greatly appreciated. Condolences may be expressed to the family online at www.rennerfh.com.

Visitation:  Friends may pay their respects from 10 to 11 a.m. Wednesday, August 22, 2018, at the Chapel of The Esquiline Apartment Community at Our Lady of the Snows Shrine, Belleville, IL.

Funeral: A Mass of Christian Burial will be at 11:15 a.m. Wednesday, August 22, 2018, at the The Esquiline Apartment Community Chapel at Our Lady of the Snows Shrine, Belleville, IL.

Burial will take place on Saturday, August 25, near his family of origin at St. Francis Cemetery, Pawtucket, RI.