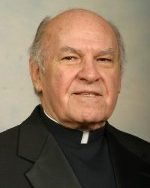 Fr. Menker was born in St. Louis, Missouri, to the late Bernard and Lillian (Ludmilla Reznicek) Menker on July 3, 1926. In 1941, after his primary education, he attended St. Francis de Sales High School in St. Louis, and in 1943, he began his journey toward the priesthood and the Missionary Oblates of Mary Immaculate at St. Henry’s Preparatory Seminary in Belleville, IL. In 1947, he entered the Oblate Novitiate in Godfrey, IL, and a year later, he pronounced his first vows as an Oblate. It was at St. Joseph Scholasticate in Ottawa, ONT, Canada, that he completed his studies of philosophy and theology in preparation for his ordination to the priesthood on May 26, 1953, at St. Peter’s Cathedral in Belleville.

His first assignment as a priest was at St. Henry’s Seminary in Belleville where he not only taught history but was also the choir director. From 1963 until 1984, he served as pastor in several parishes in Northern Minnesota and South Dakota. In 1985, he began six years of service as a chaplain at Ramsey Hospital in St. Paul, MN. Upon his retirement, he continued to live in St. Paul until moving in 2011 to the Esquiline (Apartment Community) at the National Shrine Our Lady of the Snows.

He was preceded in death by his parents as well as his brothers Bernard, Edward, Leo and John, and his sister, Lillian Schaeffer.

He is survived by ten nieces and nephews, several cousins, and many friends and former parishioners. Fr. Menker is also survived by his Oblate Family, some 3700 Missionary Oblates of Mary Immaculate serving in 60 countries.

In lieu of flowers, donations for the Missionary Oblates of Mary Immaculate would be greatly appreciated. Condolences may be expressed to the family online at www.rennerfh.com.

Visitation: Friends may pay their respects from 10:00 until 11:15 a.m. on Monday, September 30, 2019, at the Chapel of the Esquiline (Apartment Community) at Our Lady of the Snows Shrine, Belleville, IL.