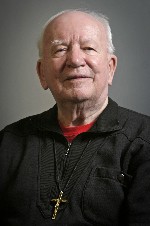 Print Obituary
Rev. Joseph A. Pitts, OMI, age 82, died in Belleville IL, on Sunday, December 18, 2016. The only child of his parents, he was born on February 22, 1934 in Chicago, IL to Joseph and Veronica, nee Szymarek, Pitts, who preceded him in death. He is survived by cousins and friends.

His Oblate education was at the Our Lady of the Ozarks Juniorate in Carthage, MO, Immaculate Heart of Mary Novitiate, Godfrey, IL, and Our Lady of the Snows Scholasticate in Pass Christian, MS. He received further education in counseling and spirituality at Loyola University, DePaul University and St. Mary of the Lake in Mundelein, IL.  He professed first vows as a Missionary Oblate of Mary Immaculate in 1954, and was ordained a priest on September 13, 1959.

His ministry included teaching assignments at St. Thomas College in St. Paul, MN and St. Benedict’s High School in Chicago, IL.  He served as Pastor in International Falls, MN and in Richfield, MN. He served on the Oblate vocation and formation staff at St. Henry’s in Belleville, IL, in Omaha, NE, and Oblate House of Theology in Chicago, IL.  He coordinated youth retreats at LaSalle Manor Retreat Center in Plano, IL and was Campus Minster at St. Scholastica High School in Chicago, IL, St. Mary’s College in Winona, MN, and Harper/Northeastern University in Chicago, IL.  His latest assignments were the Ministry Team at King’s House and the Shrine of Our Lady of the Snows in Belleville, IL before retiring there at the Apartment Community, where he resided at the time of his death.

Memorials may be made to the Missionary Oblates of Mary Immaculate.  Condolences may be expressed to the family online at www.rennerfh.com.

Visitation:  Friends may visit from 10 to 11:15 a.m. Thursday, December 22, 2016, at the Chapel of the Apartment Community at the National Shrine of Our Lady of the Snows, Belleville, IL.

Funeral:  A Mass of Christian Burial will be at 11:15 a.m. Thursday, December 22, 2016, at the Chapel of the Apartment Community at the National Shrine of Our Lady of the Snows, Belleville, IL, with Fr. Jim Brobst, OMI officiating.

Burial will be later that afternoon at St. Henry’s Oblate Cemetery Belleville, IL.

I am sorry to hear about Fr. Joe’s death. I remember his being at King’s House when I attended gatherings there. May he rest in peace.