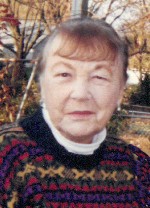 Mrs. Gravlin was preceded in death by her husband of 56 years, Harry Gravlin, whom she married on May 21, 1938, and who died on January 27, 1995; her son-in-law, Philip Ohlendorf; a grandson, Matthew Ohlendorf; her parents, John and Mary, nee Szlapkaukis, Georgel; two brothers, Joseph and Roy Georgel; and two sisters, Josephine Briesacher and Ann Appel.