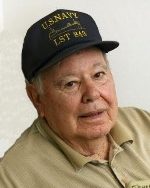 Print Obituary
Francis “Frank” Brestal passed away at the age of 92.  Mr. Brestal was a lifetime resident of Belleville.  He attended Belleville Township High School where he excelled in track, making it to the Illinois state finals in the hurdles, and football where his ability to kick extra points earned him the nickname “the educated toe”.

In February 1944, he enlisted in the Navy V-6 Program and upon graduation from high school, reported for duty in the U. S. Navy assigned to the LST 843, a large landing craft used to transport tanks, trucks, and troops to beachheads in combat in the Philippines and Okinawa during WW II.  He was honorably discharged in 1946 as a Boatswain’s Mate 2nd Class receiving two Bronze Stars, the American Area Ribbon, the Asiatic Pacific Area Ribbon, the Philippine Liberation Ribbon, and the WW II Victory Ribbon.  He returned to Belleville and married his high school sweetheart, Wildamae Spies. They were married 66 years until Wildamae’s passing in 2014.  Frank built their first home on East Belle Street in Belleville by hand, with no power tools, in the evenings after working his 8-hour day as a carpenter.

He joined the Carpenter’s Local 433 in 1946 and eventually formed the Brestal Construction Company from which he never really “retired”. He and his company built hundreds of new and remodeled homes and businesses in the Belleville area including the kitchen for the Swansea Improvement Association, known for the best fish sandwich in town.  Frank was a proud man, a friend to many, and very charitable with his time and talent. In his later years he worked as the handyman serving to maintain the Don Bosco Center in downtown Belleville. He recently received his 70-year service pin from the United Brotherhood of Carpenters and Joiners of America.

Frank was always active. He and Wildamae loved road trips and travelled to many destinations across North America from coast to coast, taking friends or the kids along on many occasions. In the early years, he built a motorized wooden ski boat by hand, spent many weekends at Crab Orchard Lake boating and skiing with friends, and later kept his seadoo at Carlyle Lake with a group of others from the Belleville area.  In the early 1950’s, he was the Assistant Fire Chief for the East Side Volunteer Fire District in Belleville and later served as the construction inspector for the fire district when the new firehouse was built on East B Street.  In sports, he led St. Paul’s Church to several championships in the Belleville Inter-Church Athletic Association basketball league.  His construction company sponsored youth baseball teams in the Belleville Khoury League. He enjoyed pitching horseshoes as a member of the Smithton Sportsman’s Club, the Swansea Improvement Association, and participated in the Illinois State Horseshoe Pitchers Association tournament. He was an avid bowler, bowling many frames at the original Bel-Air Bowl on the Beltline. But he particularly enjoyed golf, competed in many local golf tournaments, and medaled in his age group at golf in the Illinois Senior Olympics.  He could be found at Tamarack Golf Club on most weekends, either on the course or holding court from “his chair” at the end of the bar.  He was a life member and past Commander of the VFW Post 4183 at Scott Field, a member of the Belleville/ Swansea Moose Lodge 1221, a 32-degree Mason, and a member of the Ainad Temple and the Arab Patrol.

He is preceded in death by his wife, Wildamae, nee Spies, Brestal;  his father, James Brestal;  his step-father Charles “Jack” Beller;  his mother Mary, nee Lidisky, Beller; a brother, James (Margaret) Brestal; and a sister, Rose Brestal, in infancy.

The family would like to extend a thank you to the St. Paul’s Senior Community in Belleville for their care and compassion in making both Frank and Wildamae’s end of life journey peaceful.

Memorials may be made to the Shriner’s Hospital for Children. Condolences may be expressed to the family online at www.rennerfh.com.