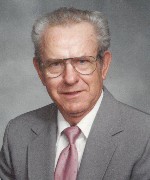 Mr. Gross retired from Schnucks Grocery Stores after many years of service.  He was a member of St. Nicholas Catholic Church, O’Fallon, IL, and was a founding member of Yesterday’s Kids at the church.  Francis was also a member of the Swansea American Legion Post 2007 and a lifetime member of the Knights of Columbus O’Fallon Council 4239. Francis was a Korean War veteran while serving in the U.S. Army.

Memorials may be made in the form of masses to St. Nicholas Catholic Church, or to the Adorer’s of the Blood of Christ. Condolences may be expressed to the family online at www.rennerfh.com.

Funeral: A Mass of Christian Burial will be held at 11 a.m. Wednesday, May 19, 2021, at St. Nicholas Catholic Church, O’Fallon, IL, with Msgr. William Hitpas officiating.

Private burial with military honors will be held on Thursday, May 20, 2021, at Jefferson Barracks National Cemetery, St.  Louis, MO.