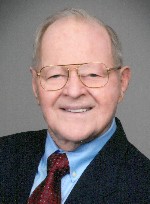 Mr. Ponsler was an electric superintendent at Illinois Power Company in Belleville, IL, and was previously a line foreman with Illinois Power Company in Decatur, IL.  He was a current member of Union United Methodist Church and a past member of Hope Church. He was active in scouting and was instrumental in his son becoming an Eagle Scout.  Frank was also involved in little league baseball with Belleville Parks and Recreation. He was a United States Navy Veteran.

Frank was preceded in death by his parents, Lawrence & Maude, nee Lawrence, Ponsler; and a brother, Charles Wesley (Nancy) Ponsler; and a sister-in-law, Jackie Ponsler.

Memorials may be made to St. Paul’s Senior Community. Condolences may be expressed to the family online at www.rennerfh.com.

Visitation:  Friends may visit with the family from 9 to 11 a.m. Saturday, May 19, 2018, at Union United Methodist Church, Belleville, IL.

Burial will be at a later date.