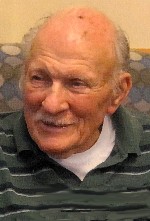 Mr. Gamerdinger served for 23 years in the Air Force before retiring as a Senior Master Sergeant. He later worked and retired from civil service. He was also the former owner of Moser’s Market in Belleville, IL. Frank was an avid toy collector and enjoyed toy shows and flea markets.

He was preceded in death by his wife of 60 years, Patsy J. “Pat”, nee Overby, Gamerdinger, whom he married on September 19, 1951, and who died on March 26, 2012; his father, Albert Gamerdinger; and his mother, Emma, nee Kuehl, Tramel; two brothers, Eddie Gamerdinger and Bill Gamerdinger; and a brother-in-law, Freddy Crawford.

Funeral:  Due to Covid-19 restrictions, private visitation and funeral services will be held with burial at Jefferson Barracks National Cemetery, St. Louis, MO.