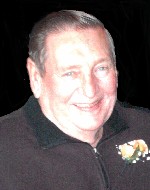 Frank was a veteran of the U.S. Navy.  He worked as a machinist for Monsanto in Sauget, IL, before his retirement.  He was a member of St. Peter’s Cathedral Parish, Belleville, IL. Frank was a big fan of the St. Louis Cardinals.

My wishes to the family. Frank was a great, great man!

Frank was great to work with and loved to talk Cardinal baseball.

Susan,
I am just reading Tuesday’s BND and am so sad to see that your Dad has died. I am so sorry for you and your family. You are in my thoughts and prayers!
Take care,
Michelle

I would like to extend my condolences to the entire family. He was a kind person and I don’t think I ever saw him without a smile on his face. He will be missed and my thoughts are with you.