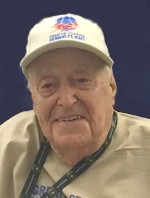 Fred was a railroad engineer at Alton Southern Railroad. He also served in the United States Military in World War II from 1942 – 1945. He joined the military and was assigned to the Army in Italy. He served his country proudly and with honor. He was a wonderful husband, father, grandfather and great grandfather. He loved his family and was kind hearted to so many. He will be greatly missed by his loved ones.

Fred’s family would like to thank Sycamore Village Assisted Living, Memorial Hospital and VITAS Healthcare for their loving care and support.

Memorials may be made to the Greater St. Louis Honor Flight or to VITAS Healthcare. Condolences may be expressed to the family online at www.rennerfh.com.