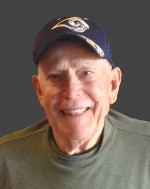 Mr. Bertelsman worked as an automobile mechanic all his life.  He was an avid golfer and enjoyed his retirement.  He was a member of St. John the Baptist Catholic Church, Smithton, IL.

Fred was preceded in death by his wife of 63 years, Gloria C., nee Masterson, Bertelsman, whom he married on August 5, 1950, and who died on August 22, 2013; his parents, William C. and Minnie, nee Macha, Bertelsman; five brothers, Leo, Henry, Raymond, George and Frank Bertelsman; and two sisters, Rose Peabody and Teresa Meyer.

Memorials may be made to St. John the Baptist Catholic Church Building Fund, Smithton, IL.  Condolences may be expressed to the family online at www.rennerfh.com.

Denise, Fred, Pop & I had a lot of good times over the many years I knew him. Especially all the golf trips we were on. You always knew where he stood and believed in. I will miss him and think about him often.

My deepest sympathy to the Bertelsman family. So sorry to hear of Fred’s passing.