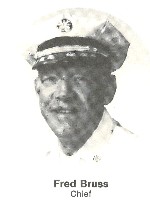 Fred served in World War II with the Army Air Force from 1943 to 1945, completing over 60 combat missions over Africa, Italy, and southern France, receiving several medals. In 1949, Fred was appointed by the Belleville Council as a firefighter, and in 1973 he was appointed Chief.  He retired in 1979. Fred served as president of the Illinois Fire Chiefs Association in 1975 and was a member of the International Fire Chiefs Association, the Professional Firefighters Association, the Illinois Firefighters Association, and the National Fire Protection Association. Fred served as president of the State of Illinois Retired Firefighters Association for 10 years, 1996 – 2006, and had served as president emeritus since 2006.  During his presidency, he helped pass some very important pension laws in the state of Illinois, including the Widows Pension. He was also a member of the American Legion Post #58, the Swansea Moose Lodge, the VFW #1739 and PSOP in Belleville. Fred attended Union United Methodist Church, Belleville, IL.

Memorials may be made to the Belleville Retired Firefighters, Hospice of Southern Illinois, or to the family.  Condolences may be expressed to the family online at www.rennerfh.com.