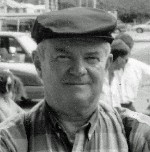 Mr. Kern was that lucky guy who grew up in the big white house behind his family’s Belleville News-Democrat.  During his formative years, from “little on up”, he worked alongside his parents, Robert L. Kern and Elsie A. Kern, nee Schrodi, and his uncle Richard “Pete” Kern.  Fred was an only child.

Kern worked and learned all the departments of a daily newspaper, from janitor to editor, and apprenticed the trades.  As general manager of the old Belleville News-Democrat, he instigated and finalized its sale in 1972. Fred served as an intelligence officer in the U.S. Air Force and was a member of the international typographical union.

In 1955 after graduating from Washington University in St. Louis, he married Barbara M. Kern, nee McKim, and they have remained steadfast together ever since.  Together they parented three sons, Robert L. Kern II, lawyer/businessman, R. Matthew Kern, professional jazz musician, (Lu Anne), and the Honorable Mark A. Kern, politician/businessman (Erin).  The couple have eight grandchildren.

At his request, there will be no visitation or funeral.  The body was cremated.