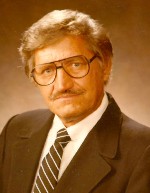 He was preceded in death by his wife of 56 years, Marilyn C., nee Fehlker, Siddle, whom he married on April 23, 1955, and who died on August 14, 2011; a son, Perry Siddle; his parents, Fred J. Sr. and Catherine, nee Schumaker, Siddle; two sisters, Mary Ann Siddle and Kathy (Ken) Vymola; a brother-in-law, Harry Moore; and a sister-in-law, Nancy Siddle.