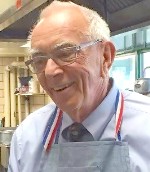 Mr. Wachtel worked for IBM for 35 years, and later as a massage therapist for ten years.  He was a member of St. Peter’s Cathedral Parish and was active with the St. Vincent DePaul Society, Cathedral Conference.  He loved water and the outdoors and adored his family.

In lieu of flowers, memorials may be made to the St. Vincent De Paul Society, Cathedral Conference.  Condolences may be expressed to the family online at www.rennerfh.com.