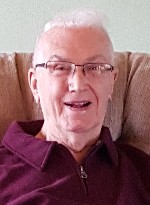 Galen was born on January 09, 1926, the third son to Arthur and Ella, nee Bracke, Eschman of Belleville, Illinois.  He served in WWII as a Signalman 2nd Class in the United States Navy from 1944 – 1946.  When he returned home, he went to work at the Hagar Hinge Company in St. Louis, Missouri – a job from which he retired after 48 years of service in 1991.  He was a member of St. Henry’s Catholic Church in Belleville, Illinois, and St. Anthony’s Catholic Church in Bartonville, Illinois.

Galen was preceded in death by his parents and his brothers, Elbert O. and Cordell E., both of Belleville, Illinois.

More than anything, Galen was a devoted husband, father, grandfather, and great-grandfather.  He was an avid (likely an understatement) St. Louis Cardinal fan, following them from Sportsman’s Park to old Busch, to new Busch, with a beer in one hand and a scorecard in the other, and a sneaky card player, tricking us all until the last hand.

In his final days, Galen was cared for by the loving and supportive staff at Farmington Country Manor in Farmington, Illinois.

In lieu of flowers, memorials may be made in the form of a mass in Galen’s name or in a monetary donation to Farmington Country Manor, 701 S Main Street, Farmington, Illinois, 61531. Condolences may be expressed to the family online at www.rennerfh.com.

Memorial Celebration:  A memorial celebration will be held at St. Anthony’s parish in Bartonville, Illinois, at a later date.