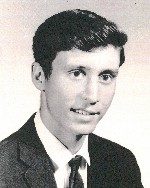 Mr. Hacker graduated from Freeburg High School class of 1963, he then joined the local carpenters’ union and the army reserve. He would work tirelessly as a carpenter and provider for his family throughout his life.

Gary was preceded in death by his son, Jesse L. Hacker; his father, George W. Hacker; his mother and step-father, Florence E. (Len) Hacker-Lowe; and his step-mother, Wilma Hacker.