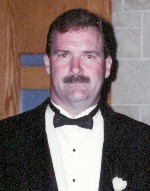 Gary was a wonderful husband and best friend to his wife, Sharon, for almost 45 years. They would have celebrated this milestone on May 21st. Hardly a day went by that Gary did not give Sharon a hug, a kiss, or tell her how beautiful she was to him. She always responded with, “What toy do you want to buy now?” While Gary loved his toys, his love for his wife and family was sincere. He truly believed in his sons, Chad and Nick, and was their biggest fan. Gary always had their backs and was a caring and supportive father. He cared deeply for his wife, children, and grandchildren, always doing what he could to show his love. One thing his family and friends loved about him was his appreciation for corny jokes. He always delivered them with a straight face, guaranteeing his audience a laugh, an eye roll or a groan.  Gary knew how to laugh at himself and not take things too seriously – he just wanted to make people smile.

Mr. Kadavi to the students, Gary worked at Belleville Grade School District 118 for more than 30 years. In addition to working within his community, he also served in the U.S. Army Signal Corps.

Gary was preceded in death by his son, Nicholas Kadavi; his parents, Joseph and Rosemary Kadavi (nee McGuire); a brother, Bob Kadavi; and his father-in law and mother-in-law, Donald and Ann Miller.

Memorials may be made to the Belleville Area Humane Society or to St. Jude Children’s Research Hospital. Condolences may be expressed to the family online at www.rennerfh.com.