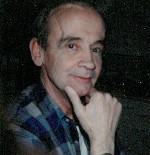 Gary was born on November 24, 1940 in Neosho, MO to his parents, Howard Lee and Mary Jane Layman (nee Allen). He was a United States Navy veteran (1960-1966), deployed on the USS Kitty Hawk (CVN 63) as an Aviation Boatswain’s Mate. He also served valiantly in a special combat unit in Vietnam. Following his honorable discharge, Gary worked many jobs including manufacturing, welding, carpentry, and maintenance. He was known by everyone as a dedicated employee; one that worked hard to provide for his family and set an example for the generations that would follow him.

Gary is survived by his wife of 51 years, Judith C. Layman (nee Gray); his son and daughter-in-law, Howard William (Bill) and Cynthia Layman of Lebanon, IL; his son and daughter-in-law, Daniel Lee and Megan Layman of Apex, NC; and his brother and sister-in-law, Richard and Debbie Layman of Benton City, WA. He was a dedicated grandfather to four grandchildren (William Derric, Joshua Michael, Abigail Kathryn, and Benjamin Wallace), and uncle and great uncle to many nephews and nieces. He was preceded in death by his parents, Howard and Mary Layman; his son, Michael Lee Layman; his twin brother Larry Layman; and his sisters, Mary Sue Layman and Delores Pavlik.

The family is grateful to the Home-Based Care Unit of the Veterans Administration of St. Louis for their dedication to the care of Gary over the past two years. The family is also grateful for all involved in the care from Hospice of Southern Illinois.

Gary will be buried with honors in a ceremony at Jefferson Barracks National Cemetery on Friday, February 9, 2018 at 10:30 a.m., with an escort by the Patriot Guard Riders. There will be a visitation from 4:00-7:00 p.m. Thursday, February 8, 2018 followed by a memorial service at 7:00 p.m.  with  Rev. Hugh Fitz officiating at George Renner and Sons Funeral Home in Belleville, IL. All are welcome to attend and celebrate Gary’s life and legacy. In lieu of flowers, the family requests that donations be made to the St. Louis Shriners Hospital for Children 4400 Clayton Ave., St. Louis MO 63110, or to Hospice of Southern Illinois 300 E. Main Street, Belleville, IL 62220.