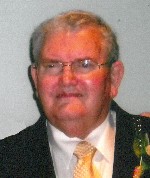 Mr. Ahring graduated from Collinsville High School in 1950.  He had been flying with the civil air patrol since he was 15, so during his senior year, he enrolled in the U.S. National Guard and received his flight instructor certificate.  From 1950 to 1954, he served in the U.S. Air Force as a staff sergeant.  He also served with the French National Guard from 1950 to 1952 in Europe on the First Squadron for the Thunderbirds.

George attended Belleville Area College, and later graduated from Illinois State in 1960. He taught high school and aviation for 20 years, and later worked in defense mapping for the United States Department of Defense for 23 years.  He retired from SWIC in 2010.

Mr. Ahring had worked on the development of Mid-America Airport, was past commander of Swansea VFW Post 5165, chaplain of Millstadt VFW Post 7980, and a member of Scott Air Force Base VFW.  George was a member of the Korean War Veterans Association, the National Active and Retired Federal Employees Associations (NARFE), Mascoutah Moose Lodge #815, the Belleville Shriners and Masons.

George loved his wife and children very much, and he never met a person he didn’t like.

He was preceded in death by his wife of nearly 55 years, Rose Mary Ahring, nee Kempf, whom he married August 29, 1959; his grandparents, George W. and Josephine, nee Ronco, Ahring; two brothers-in-law, Louis Kish and Cletus Frerking; and a half-brother, Aaron Lee Ahring.

Funeral:  Funeral services will be held at 1 p.m. Saturday, June 2, 2018, at the funeral home, with Fr. Dennis Voss officiating.