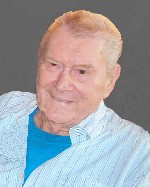 Mr. Hacker worked in the construction trade and was a member of the Wood, Wire and Metal Lathers International Union.  He helped all his children build something and took special pride in the aluminum ships and airplanes he built.  He was one of the original founding members of the Freeburg Sportsman’s Club and enjoyed fishing and bowling.  George especially enjoyed traveling in his motor home.  He was a member of the Belleville Swansea Moose Lodge #1221.

Memorials may be made to St. Paul’s Home, Belleville, IL, or to Hospice of Southern Illinois.  Condolences may be expressed to the family online at www.rennerfh.com.

To my brother, Wayne “Tom” Walker, and his wife Jeanne and all their children and grandchildren and great grandchildren, my prayers and sympathy are with you all. Celebrate this gentleman’s life knowing hes is reunited with his wife and family in Love through Jesus Christ.

prayers go out to the family
sue karfs

To my husband (scott) and his family and all neices.nefews
and grandchildren and great grandchildren, my prayers and sympathy are with you all. Celebrate this life knowing she is reunited with her daugter and husband and family in Love through Jesus Christ.