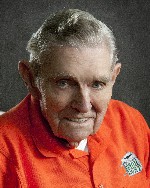 Mr. Sodam worked in various manufacturing positions in East St. Louis and Belleville, and various positions in the Stove, Furnace and Allied Appliance Workers International Union of North America AFL-CIO. He was the union’s second vice president at the time of his retirement.

George was a World War II U.S. Army veteran, having enlisted on May 4, 1943, and being honorably discharged on December 1, 1945.  He received many decorations, including four overseas service bars, the Asiatic-Pacific Theater ribbon with two bronze battle stars, a good conduct medal, and WWII Victory medal.  Mr. Sodam was a member of the 706th Petroleum Distribution Engineers, constructing and operating the fuel pipeline running from India, across Burma, and into China, which supported both the allied ground and air personnel. He was a lifetime member of the Veterans of Foreign Wars Post 1739, Belleville, IL, #242398.

Mr. Sodam was a wonderful husband and father; married 60 years to Velma, his one true love, and raising six children through good times and bad. He loved to fix anything that broke or build anything that needed building.  In retirement, he pursued his favorite pastimes of growing crops, attending auctions, working out at the YMCA, and making people smile with his quick wit. He touched many with knowledge and a sense of humor.

He was preceded in death by his wife, Velma, nee Grayson, Sodam, whom he married on January 21, 1948, and who died on April 30, 2008; two sons, Kenneth J. Sodam and James E. Sodam; his parents, Edward and Dora, nee Schaum, Sodam; and one brother, Melvin Sodam.

The family wishes to express thanks to Hospice of Southern Illinois for their support with end of life care, and the staff at Rosewood Care Center for the loving care they provided their loved one.

“I am ready to meet my Maker.  Whether my Maker is prepared for the great ordeal of meeting me is another matter.” – Winston Churchill

Visitation:  Friends may visit with the family 4 to 8 P.M. Thursday, July 21, 2016, at George Renner and Sons Funeral Home, Belleville, IL.

The comrades of Belleville VFW Post 1739 wish to express our condolence to the family, and our thank you to Comrade Sodam for his service to our Country.

Kathy and family, I am thinking of you and wishing you all peace.