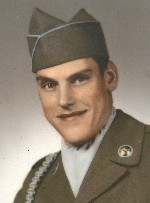 Mr. Stehlick was employed as a stove worker at Peerless Enamel for 38 years before his retirement.    He also worked at Stein Automotive and the Belleville Shoe Factory.  George was a member of the Belleville Senior Citizens Center.  He was a World War II U.S. Army veteran.

George was preceded in death by his parents, Jacob and Edith, nee Dietrich, Stehlick; and two brothers, Art and Jacob Stehlick.

Surviving are his close friends, John and Nadine Mayville,
Megan and Mitch Mayville,
and Mary Blaies;
and his dear friends and caregivers at Cambridge House of Swansea, Sonya and Tracy.

Memorials may be made to the American Cancer Society.  Condolences may be expressed to the family online at www.rennerfh.com.