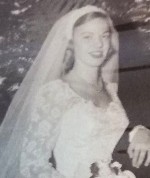 Georgia Rose McCurdy (nee Reichert) passed away peacefully early Tuesday morning surrounded by family.  She was born August 25, 1932, at St. Elizabeth’s Hospital in Belleville, Illinois.  She would have celebrated her 90th birthday next month.

Mom grew up in Freeburg, Illinois.  As a child she traveled by train with her family on the horse racing circuit, and loved to watch her horse, Tippy Toe, compete.  She loved to dance, practicing diligently, and eventually performed en pointe as a ballerina.  She graduated from Notre Dame Catholic High School, where she made lots of friends and was a member of the basketball team.  Many happy memories during those years, including friendships that lasted forever.

She married her husband, Jim McCurdy, when she was 23, and became a mother two years later.  Their marriage produced two daughters and a son, and she was a doting mom who was active in all her kids’ activities.  Choreographer, make-up artist, scenery painter, props master, whatever was needed for her daughter’s little theater productions; and served as a timer, scorekeeper, or lane judge at her son’s swim meets.  She was at every play, every swim meet, every band contest and concert, whether as a helper or audience member.

Manners were paramount in our home.  Both of our parents were teachers of the social graces, and both of her daughters attended White Gloves and Party Manners to reinforce the things she sought to teach.

She was a storyteller, and the tale of Fancy Fish was a favorite. Fancy was an extraordinarily beautiful angel fish who was very popular, but eventually she lost all of her friends because she thought her beauty made her better than they were.  Lesson learned about beauty and popularity.

She was very active in the old GOP party and loved her time with her Republican lady friends.  She even ran for public office, and campaigned hard, but it was 1974, the first election cycle after Watergate, and no Republican in St. Clair County won that year.

Her bridge club was also a source of fun and camaraderie, and when they’d been together 40 years a picture appeared in this newspaper to commemorate it.  They may have spent more time gossiping than bridge playing though because she always came home with lots of stories.

Despite vehemently denying she was a “women’s libber,” she worked outside the home from the time her children were in middle school, and so set an example of work ethic and commitment for us to follow.

She was relentlessly devoted to her family, had a deep love for them and a desire for their happiness, and a willingness to do whatever she could to make sure that happened.  She was doggedly determined, perseverant, caring and kind.  She just never gave up on anything she undertook and did her best to instill that trait in her children.

She had a such a sweet tooth no matter the form, and she loved watermelon!

She was a good Catholic woman her whole life long, and up until a year or so ago when she lost the ability to speak full, coherent sentences she recited the Hail Mary every single day, and on occasion the Lord’s prayer.

She taught us to be engaged in the world, to believe in God, to be kind and forgiving, and to always keep trying. Quite a legacy she’s left us.

Memorials may be made to St. Jude’s Children’s Research Hospital, 501 St. Jude Place, Memphis, TN., 38105. Condolences may be expressed to the family online at www.rennerfh.com