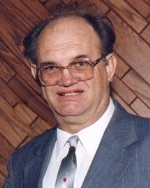 Mr. Lonnon was a member of St. Luke’s Catholic Church, Belleville, IL, and belonged to the Knights of Columbus Council 1028.  He worked as a mechanic at Scott Air Force Base before his retirement, and he was a member of the Non-Commissioned Officers Association.  Gerald was a veteran of the United States Air Force.

Gerald will be greatly missed by all of us, my children and my grandchildren. Gerald became an important part of our family and we will always love him.

I want to express my sympathy to Gerald’s family. I did not know him well but remember him being at family reunion functions. My father, Fred Schugart, was his first cousin. I knew Gerald’s mother well. I will hold Gerald in my prayers. Sister Anita Schugart

Sorry For Your Loss. Please accept this electronic message in lieu of a Sympathy Card. Local National Active and Retired Federal Employees Association (NARFE) volunteers provide help in reporting the death of any federal civilian retiree or a retiree’s spouse to proper authorities. They will explain the process as needed and if requested, can report the death to the Office of Personnel Management (OPM) for you. The NARFE Service Center is located in the Civilian Personnel Office, building 50, 201 W Winter St, Scott AFB. You may visit the Service Center on Tuesdays, 10AM to 2PM or call 618-256-9350. You may leave a voice mail message at other times and we will return your call the following Tuesday. You may also call either of our Service Officers, Gene Wiggins at 618 566-7980 or Dean Hemmer at 618 233-3819, for immediate assistance if required.