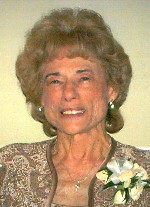 Print Obituary
Geraldine “Gerry” Alvina Oexner, nee Phillips, 92, of Belleville, IL, was called home to be with her heavenly Father on June 9, 2019, surrounded by her loving family. The daughter of Lawrence and Florence Phillips, she was born on March 14, 1927, in Belleville, IL.

Gerry’s lengthy career began as a telephone operator with Southwestern Bell then known as “Ma Bell,” where the operators answered a traditional switchboard. She retired as a district manager for Illinois Bell after working in Belleville, East St. Louis, and St. Louis. She then spent her time nurturing her grandchildren, taking college art history courses and traveling to Mexico, Europe, and Alaska. For many years, Gerry volunteered at MindsEye, the virtual newsstand, where she shared her voice and talents, as she read on the air for those with visual disabilities. She was never without a kind word or helping hand. She was a member of St. Teresa Catholic Church, Christ the King Prayer Group, the Telephone Pioneers, Zonta Business International, and Women of the Moose. She truly taught us that the love of family is life’s greatest gift. She will be dearly missed by all.

She was preceded in death by her husband, Lester “Les” Harry Oexner, her parents, Lawrence W. and Florence C., nee Grandcolas, Phillips; a sister, Loretta Stewart; and a brother, Robert Phillips.

Memorials may be made to The MindsEye (formerly Radio Information Service) or to Hospice of Southern Illinois. Condolences may be expressed to the family online at www.rennerfh.com.

Visitation: Friends may visit from 9:30 to 11 a.m. Friday, June 14, 2019, at the Esquiline Apartment Community Chapel at the Shrine of Our Lady of the Snows, Belleville, IL.

Funeral: A Mass of Christian Burial will be held at 11:15 a.m. Friday, June 14, 2019, at the Esquiline Apartment Community Chapel at the Shrine of Our Lady of the Snows, Belleville, IL, with Father Joseph Ferriaoli, OMI, officiating.