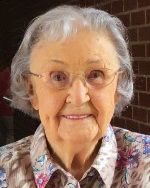 Gertrude was born on a farm in Saint Anthony, MO, in 1916 to Stephen and Anna Otto, nee Boeckman. She moved to St. Louis at age 16 to help support her widowed mother and her nine brothers and sisters. She married Anthony J. Buescher in 1939 and moved to Saint Libory and then to New Athens, IL, where she worked in her husband’s State Farm Insurance offices. Gertrude was widowed at age 41 with six children and pregnant with the seventh.

Alone, but bolstered by her deep faith, she moved to Belleville, IL, with her children where St Augustine of Canterbury Catholic Church and School were central in her life. She joined the Queenship of Mary Sodality and the Mothers’ Club. She was also a quilter and donated hundreds of hours of sewing to raise money for her church. Gertrude was known for her strong work ethic, her selflessness, her easy laugh and her love for her family. She was never happier than when “the whole gang” was together. Fifty-six of her descendants and spouses were all together to celebrate her 100th birthday last October with a huge party with 100 guests and by watching her throw out the first pitch for her beloved St. Louis Cardinals at a game at Busch Stadium.

Gertrude lived independently at Our Lady of the Snows Retirement Center in Belleville for the last 7 1/2 years where she was known for her kindness and sweetness and as being an inspiration. She will be greatly missed speed walking down the halls and at the card and Bingo tables where she was highly competitive and frequently successful.

Gertrude was preceded in death by her husband, Anthony Buescher, in 1958; son, David, in 1961; son-in-law, Frank Janson, in 2004; granddaughter-in-law, Pam Buescher, in 2014; and by seven brothers, one sister, six sisters-in-law and four brothers-in-law.

In lieu of flowers please give someone you love a hug today and say a prayer for Gertrude. She believed in the power of prayer.  Condolences may be expressed to the family online at www.rennerfh.com.

Visitation: Friends may visit from 10 to 11:15 a.m. Saturday, August 12, 2017, at the Shrine of Our Lady of the Snows Apartment Community Chapel, Belleville, IL.

Funeral: Mass of Christian Burial will be at 11:15 a.m. Saturday, August 12, 2017, at Our Lady of the Snows Apartment Community Chapel, Belleville, IL, with Fr. Joseph Ferraioli, O.M.I. officiating.

Burial will be at Green Mount Catholic Cemetery. A reception will be held at Eckerts immediately following the burial.