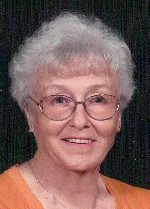 Mrs. Corrigan retired in 1985 as executive Secretary of the Surgeon General at Scott Air Force Base. She was a member of St. Augustine of Canterbury Catholic Church, Belleville, IL, and a member of Holy Family Catholic Church, Shell Knob, MO.  Trudy served as secretary / treasurer of the Airport Homeowners Association, Golden, MO, and was a hospice volunteer. Upon retirement, Trudy and her husband, Pete, moved to Table Rock Lake, Golden, MO, and enjoyed many happy years there.  She loved her family very much.

She was preceded in death by her husband of 63 years, Peter Corrigan; her parents, Roy E. and Flossie, nee Spracklen, Litten; her grandparents, who raised her from the age of seven after her mother’s death, V.E. and Sarah Spracklen; four brothers, Winifred, Frank, Roy, and Ronald Litten; a sister, Ruth Litten; a son-in-law, James Fuehner; a step-sister, Evelyn Reichart; and a step-mother, Rose Litten.

Memorials may be made to St. Augustine of Canterbury Catholic Church, Belleville, IL, or to any hospice of the donor’s choice.  Condolences may be expressed to the family online at www.rennerfh.com.