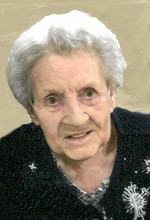 Gladys was a homemaker and formerly employed by Magna Bank.  She was a member of St. Agatha Catholic Church, New Athens, IL, and belonged to the Quilters Club at the church.

Memorials may be made to New Athens Home for the Aged. Condolences may be expressed to the family online at www.rennerfh.com.

Burial will be at St. Joseph’s Catholic Cemetery, Freeburg, IL.