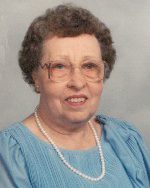 Mrs. Tribout was a devoted homemaker and a member of St. Teresa Catholic Church, Belleville, IL.

She was preceded in death by her husband of 51 years, Edwin Tribout, whom she married on May 28, 1940, and who died on February 26, 1992; a son, Robert V. Tribout; her parents, Fred W. and Cleola, nee Neighbors, Lotz; three brothers, Cornell Lotz, Orville Lotz, and Fred Lotz Jr.; and a sister, Thelma Kaiser.

Memorials may be made to the Little Sisters of the Poor, 3225 North Florissant Avenue, St. Louis, MO 63107.  Condolences may be expressed to the family online at www.rennerfh.com.