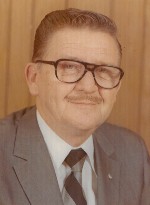 As a young man Glenn attended school in Coulterville and in Belleville.  He played in the grade school and the high school bands.

During WWII Glenn served 30 months in the Southwest Pacific theaters in the infantry.  He was stationed in New Guinea, Luzon in the Philippine Islands and Japan. He earned the following awards: the Good Conduct Ribbon, the Southwest Pacific Ribbon with 2 battle stars, the Philippine Ribbon with 1 battle star, the Army Occupation Ribbon, the Victory Ribbon, the Silver Star Medal, two Bronze Star Medals, the Presidential Unit Citation, and the Combat Infantryman Badge.

After his military career he worked as a supervisor at Scott Air Force Base for 22 years. He then was hired by the 1st National Bank of Belleville and was made manger of the bank at Scott Air Force Base. Later he was promoted to Vice President and worked for 22 years at the main bank in Belleville.  He was an honorary graduate of BTHS West High School in 2015 as he left school to serve in the military.

Glenn was a member of Union United Methodist Church since birth, the Veterans of Foreign Wars, and the Belleville Moose. Glenn loved his wife and family dearly.

Surviving are his daughter, Lennis (Bruce) Bange; and a niece, Margie (John) Teetor of Prescott, Arizona.

Visitation:  Friends may visit from 9 to 11 a.m. Friday, February 5, 2021, at George Renner & Sons Funeral Home, Belleville, IL. Standard CDC guidelines, including masks and a limited number of visitors at any one time will be observed.