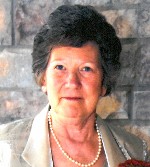 Mrs. Carlson was a homemaker and enjoyed cooking and baking and was especially known for her pies.  She also enjoyed knitting.  Gloria was a faithful follower of Charles Stanley’s “In Touch Ministries.” For 22 years she and her husband Gene retired to Flagstaff, Arizona, where they enjoyed hiking, visiting national parks and dancing.  She was an avid scrabble player and could be found most evenings with her bowl of popcorn.

She was preceded in death by her parents, William T. and Clara L., nee Baker, Reed; and a sister, Judy Stoffer.

In lieu of flowers, memorials may be made to the Violence Prevention Center of Southwestern Illinois. Condolences may be expressed to the family online at www.rennerfh.com.