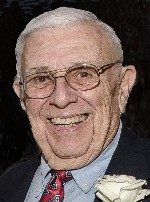 Mr. Ehret was the president and owner of Ehret, Inc., in Belleville.  He was a life-long resident of Belleville, IL, and a part-time resident/snowbird, of Ft. Myers, Florida.  Grant was a member of the Moose Lodge, a member of the Elks Lodge, a member of the Plumbers and Pipefitters Local 101, and one of the founding owners of Clinton Hill Country Club.  Mr. Ehret also belonged to the Tancred Chapter Order of DeMolay International, and the DeMolay Majority Club, where he was the recipient of the DeMolay Legion of Honor.  He belonged to the Belleville Area Holtzschnitzers/Midwest Woodcarvers, and the Great Southwestern Illinois Association of Plumbing, Heating, Cooling and Mechanical Contractors Association. Grant was an Eagle Scout and a U.S. Navy Korean War veteran.

In lieu of flowers, memorials may be made to the Dammert Geriatric Center or to Family Hospice. Condolences may be expressed to the family online at www.rennerfh.com.